Plastic waste, especially packaging waste, is generally a mixture of materials with a high degree of contamination. Recycling this raw material is usually difficult, as sorting and cleaning of waste is in many cases neither economically viable nor technically feasible. Chemical recycling is a promising process to recycle these material streams into chemicals, waxes or liquid energy carriers. 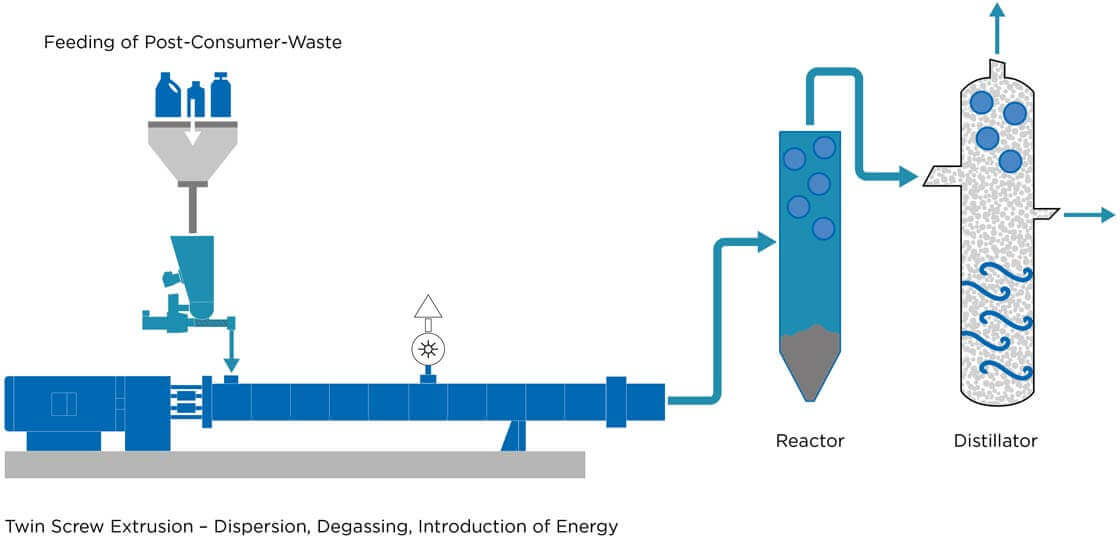 Chemical recycling is a promising process for recycling mixed plastic waste, both technically and economically.

After post-consumer waste, either shredded or compacted, is reliably added to the extruder’s process section by a high-accuracy Coperion K-Tron feeder, a great deal of mechanical energy is introduced into the material in shortest time thanks to the continuous surface renewal as well as intensive dispersion and shearing along the twin screws.

Within about 30 seconds, a homogeneous, highly devolatilized melt with a temperature of up to 350°C is produced, into which the energy has been introduced very efficiently.

Further materials, such as catalysts, can be added and mixed in as needed. In some cases, residual water or chlorides from PVC are introduced into the extruder in minute quantities along with the plastic waste. Both are reliably extracted via vacuum devolatilization on the extruder's process section.

Within the reactor, the melt, which was previously heated to up to 350°C in the twin screw extruder, is further heated. At up to 500°C pyrolysis of the polymers takes place, the splitting of polymer chains into shorter units in an oxygen-free environment. The pyrolysis of polymers utilizes the random scission mechanism, where free radicals are generated. At the same time, chain reactions are initiated which lead to cracking polymers into a broad mixture of hydrocarbons in liquid and gaseous phase. The most important factors for driving this process are residence time, temperature, and the type of pyrolysis agent.

Most of the inorganic components of the post-consumer waste remain in the reactor's sump and are removed. The polymers’ organic hydrocarbons evaporate. They are transformed into monomers, petrochemical raw materials, or synthesis gases and then processed further in a destillator into marketable products such as oil, heavy fuel, or waxes.

Coperion’s twin screw extruder technology is particularly well suited for an efficient energy addition and therefore for chemical recycling of plastics. Twin screw extruders possess numerous advantages that are especially beneficial in chemical recycling. The technology covers a broad range of throughputs. On larger ZSK extrusion machines, throughputs of up to 20 t/h can be realized. Polymers of various viscosities are reliably plastified thanks to the highly effective mode of operation of the twin screws. Plastic energy dissipation takes place in no time. When needed, corrosion and wear protection of all product-contact parts within the process section can assure long extruder lifetime even when processing very aggressive materials.

Using the ZS-B MEGAfeed post-consumer waste can be fed in very large quantities into the ZSK twin screw extruder and reaches significantly higher throughput rates than before. This makes preheating via the mechanical energy input of the twin scews even more economical in chemical recycling processes.

You want to learn more about Coperion's solutions for various plastic recycling applications?

Stay up to date with the latest newsletter edition