Sign up for the Coperion newsletter to receive the latest updates

The Coperion K-Tron External Spray Lubricant Feeder utilizes superior feeding technology to ensure accurate delivery and metering of the lubricant to the tablet press nozzle system. This specialized feeder is an adaptation of Coperion K-Tron’s sanitary pharmaceutical design twin screw feeder and features the addition of a specialized gas venturi nozzle for aspiration of the lubricant direct to the tablet press. 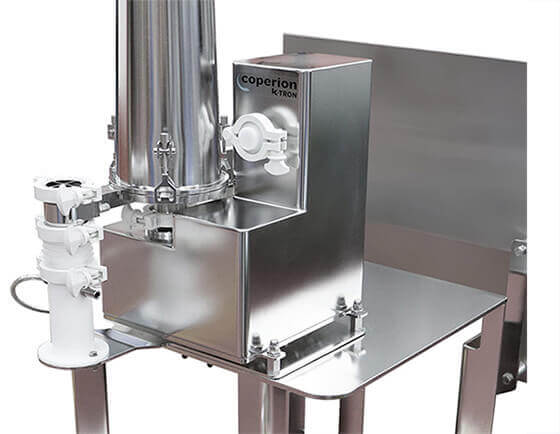 Today’s solid oral dosage formulations typically include a mixture of active pharmaceutical ingredient and a variety of excipients. Pharmaceutical excipients are substances other than the active drug that are included in the manufacturing process or are introduced in the finished pharmaceutical product dosage form. Excipients are used to provide a number of different functions and include binders, glidants, diluents and lubricants. Lubricants are commonly used in tablet formulations to reduce die wall friction during the compaction and ejection of the tablet from the press. This reduction in friction helps to minimize both the wear of the press punches and dies and damage to the tablets when ejected from the die cavity.

Process
To date, two general methods are used to introduce lubricant to the process, internal lubrication or external spray lubrication. In a traditional batch process, lubricant is mixed with the granules or free-flowing bulk solids before they are compressed in the tablet press. This traditional approach, known as internal lubrication, may also require an additional short-term, low shear blending step to avoid overlubrication and excessive blending. Because the granules and lubricants vary greatly in particle size and in bulk density, the risk of de-mixing is very high. Many manufacturers tend to overfeed lubricants to ensure the lubricant concentration in a tablet is not too low. In continuous processes the lubricant is generally added via a port at the end of the continuous mixer, also to try and avoid overmixing. Although the feed rate requirements of this addition are very low, overlubrication can still result and cause reduced tablet strength and slow tablet dissolution. 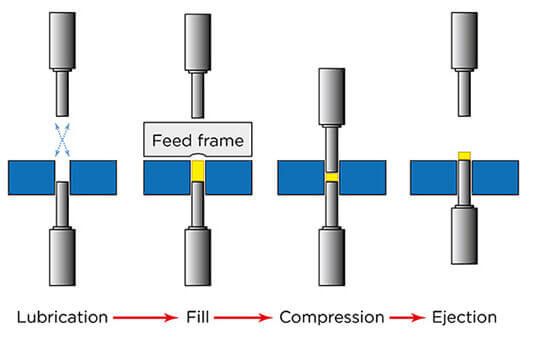 External spray lubrication (ESL), also known as die wall lubrication (DWL), is the newer approach where a lubricant is sprayed directly onto the tablet press tooling to facilitate tablet ejection. This approach has proven to help reduce the possibility of overlubricating the formulation since it is directing the lubricant straight to the location where it is needed while reducing the levels of lubricant needed in the tablet.

The Coperion K-Tron External Spray Lubricant Feeder utilizes Coperion K-Tron’s superior feeding technology to ensure accurate delivery and metering of the lubricant to the tablet press nozzle system. This feeder is an adaptation of Coperion K-Tron’s sanitary pharmaceutical design twin screw feeder and features the addition of a specialized gas venturi nozzle for aspiration of the lubricant direct to the tablet press. Typical feed rates can range from 0.2 to 2 kg/h (0.44 to 4.4 lb/h) utilizing either the QT20 twin screw feeder or the MT12/MT16 microfeeders.

Feeding Principles
The feeders used for feeding lubricant are typically the twin screw design because they are much better suited for non-free-flowing or cohesive materials. By using two co-rotating screws, the constant “self-wiping” effect of one screw against another helps to maintain constant flow without buildup in the screw tube.

In the case of a screw feeder, three factors affect volumetric screw feeder accuracy: the consistency of delivered volume per screw revolution, the accuracy of screw speed control and bulk density consistency.

Typically, volumetric feeders are open-loop devices and cannot detect or adjust to variations in the material’s bulk density. Due to the open-loop concept, head load variations and material buildup on the feed device can change the volume-per-revolution relationship, throwing off calibration without any outward sign. In addition, when feeding difficult flowing or highly cohesive materials (such as magnesium stearate), volumetric screw feeders can have high variations in feed rate because of inconsistent filling of the twin screws, due to bridging of material in the hopper for example. Therefore, when used with volumetric control, the constant mass flow of the lubricant cannot be accurately validated. However, because a load cell or weighing device is not used, this design is sometimes viewed as being simpler and requiring lower investment cost.

It should be noted that in cases where exact validation of the amount of lubricant applied to the press is not required, such as in applications where the feeder is only used to avoid sticking and picking of the tooling, then a volumetric feeding device is acceptable. However, if an exact recording of the amount discharged from the feeder and applied to the press is required, and delivered amounts need to be recorded and validated, then the gravimetric loss-in-weight design is mandatory.

Gravimetric Feeding
By utilizing the patented SFT weighing technology, Coperion K-Tron gravimetric lubricant feeders automatically detect and adjust to the varying conditions as outlined above. Gravimetric mode means that the weight of the lubricant is continuously measured and the controls keep weight reduction per time constant by actively adjusting the speed of the twin screw feeder. As the feeder discharges material, system weight declines. The speed of the metering device is controlled to result in a per-unit-time loss of system weight equal to the desired feed rate. By adjusting speed to maintain a consistent mass flow (or weight per time), the unit can be validated to prove a steady and uniform feed of lubricant to the tablet press. In addition, due to the extremely short time in which the tools can be lubricated (e.g. parts of a second), high short-term accuracy is an essential benefit, which is only available with a gravimetric feeding system. The increased investment cost is balanced out by the savings in lubricant cost since there is far less waste.

Venturi Configuration
After exiting the feeder, the lubricant powder is discharged directly into a gas injector or venturi nozzle to produce an atomized spray. The gas in the pneumatic tubing conveys the lubricant to a nozzle which is fixed to a tablet press. Typical pressures can range from 0.1 to 6 bar and are usually adjusted by means of a pressure regulator mounted directly on the feeder frame or portable cart. The nozzle is mounted on the press in such a way that all surfaces of the tablet press tools that are in contact with the granulate including the die as well as the punches are uniformly coated with lubricant as shown in Figure 1. Any dust created inside the tablet press is usually eliminated by an exhaust air system. It should be noted that both the press nozzle configuration and exhaust air system are provided by the press manufacturer and vary depending on the type of press utilized and overall rate/size of the press. Coperion KTron has two options in design on the venturi configuration with either a vertical output or the traditional horizontal output. Tests on the feeder configuration can be performed at the end user’s site or at one of Coperion K-Tron’s test labs.